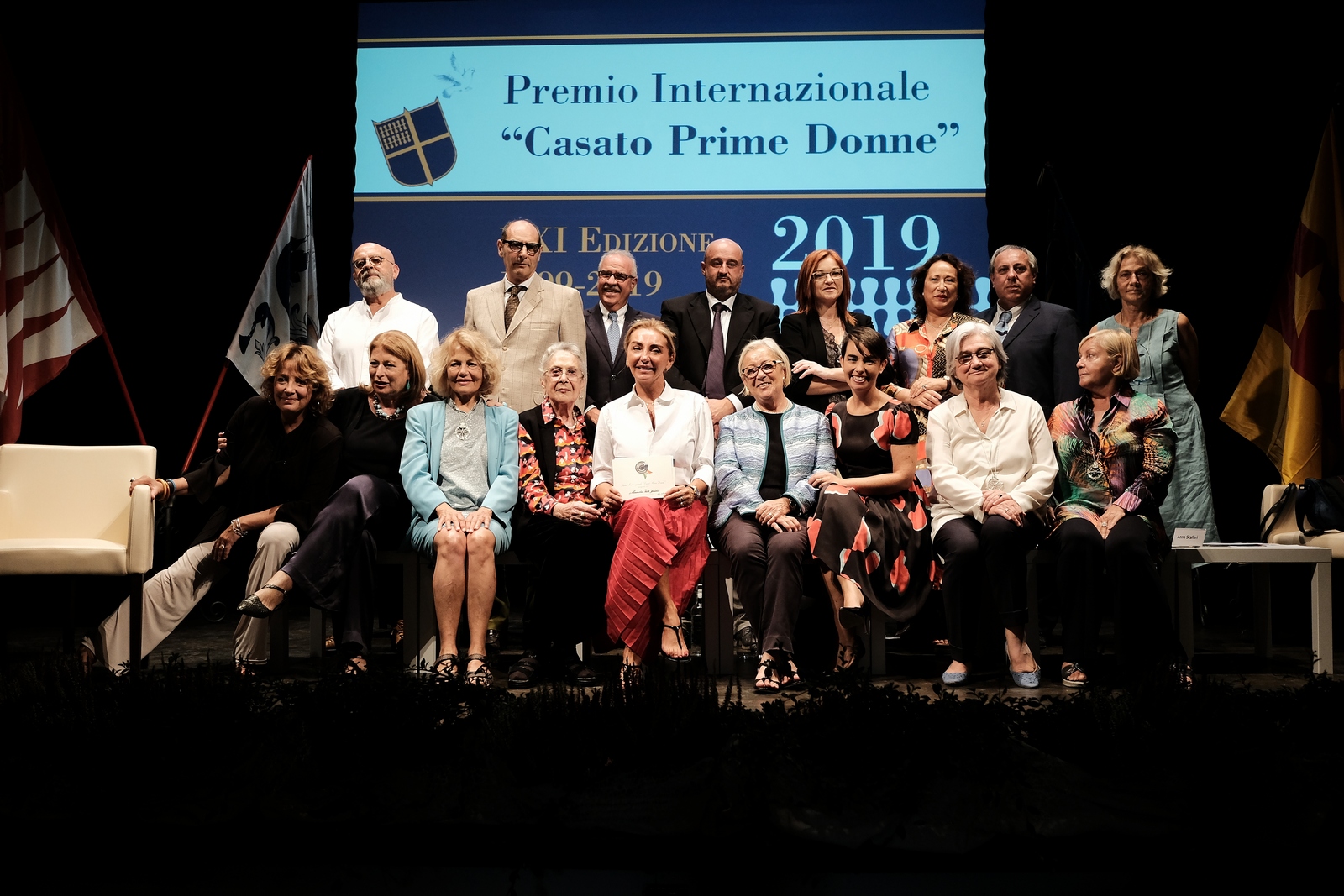 “Montalcino is incredibly beautiful, wonderfully steeped in history. It is perfect. And then there is the wine. At all the moments in life when we achieve success, there is always a glass of wine or a glass raised in a toast. Being involved with viticulture is a way to unwind, a contact with nature that takes us back to the origins and also helps us understand who we are and where we come from”. These are the words of Alessandra Ghisleri, pollster, political commentator and a familiar face on Italian television. On 15 September, at the Teatro degli Astrusi in Montalcino, she received the Premio Casato Prime Donne 2019, the prize organized by Donatella Cinelli Colombini (proprietor of Casato Prime Donne, the first winery entirely run by women) and which is presented to a prominent female personality every year. In the past it has gone to personalities such as the activist Kerry Kennedy (daughter of Robert Kennedy), ballerina Carla Fracci, Olypmic champion Josefa Idem, virologist Ilaria Capua, astronaut Samantha Cristoforetti, astrophysicist Sandra Savaglio, designer Carla Fendi, and Sara Gama, captain of the Italy Women’s National Football team. “This year, for the first time, we address the issue of politics. There is a difficult relationship between women and politics, as shown by their lower voter turnout compared with that of men, and their little inclination to take part in political life. Yet Tuscany was one of the first in the world to give the vote to women, who have been voting since 1849” explained Donatella Cinelli Colombini. Alessandra Ghisleri drew up an identikit of Italian women in the face of politics. Italian women feel excluded from political debate and have distanced themselves from it, feeling that the gap between them and men is still too wide (almost 70% think that equality has not been reached even within the European Union). “But women are attaining the highest levels in politics, I’m thinking of   Christine Lagarde at the head of the Central European Bank, and Ursula von der Leyen, President of the European Commission “, Ms Ghisleri pointed out. The prize is also designed to recognize those who have popularized Brunello and its territory. During the ceremony at the Teatro degli Astrusi, the award was presented to four journalists chosen by the jury chaired by Donatella Cinelli Colombini and comprising, among others, her mother Francesca Colombini Cinelli (honorary president and founder of the award), and former president of the parliamentary Antimafia Commission, Rosy Bindi. Marco Rossetti and Francesca Topi won the “Montalcino and Me” prize for the episode about the Val d’Orcia in the RAI programme “Geo”;   Eleonora Cozzella received the “Montalcino, its history, art and wine” award for her article “The Wine Roads”, published in la Repubblica, while Riccardo Lagorio’s piece on the 2018 harvest in the monthly magazine “Dove” saw him collect the award offered by the Brunello Consortium (“Brunello and other Montalcino wines” section) and presented by Consortium President, Fabrizio Bindocci, with the following motivation: “Lagorio has most effectively described Montalcino, its wines and its excellence, showcasing the stories, places and people that make the home of the great Tuscan Red one of the only areas of its kind in the world. This is why the Brunello Consortium wanted to reward not only the journalist’s prowess, but also and above all his great professionalism put at the service of all of us to safeguard and promote our country’s excellences”.